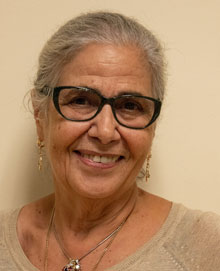 Jacqueline Semha Gmach`has spent a lifetime dedicating her energies to the furtherance of Jewish culture.  A native of Tunisia, Mrs. Gmach is the curator of several San Diego-based Jewish events (San Diego Jewish Film Festival, San Diego Music Festival, Samuel and Rebecca Astor Library - among them the renowned San Diego Jewish Book Fair.  As the Book Fair Director, she herself became a source of inspiration to authors and helped sprout new national literacy events.   Some of her own writings have appeared in newspapers and magazines— (i.e. The Bird, A Bomboloni Story, is in the San Diego Jewish Journal, The Gilberta Story is in Yitta Halberstam’ Small Miracles.) 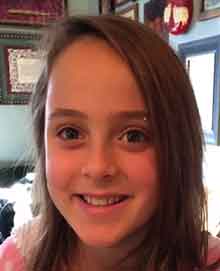 Yvette Ballantyne is the third of Jacqueline Gmach’s five grandchildren.  She is now 11 years old and lives in Missoula, Montana with her parents Rebecca Deborah Gmach and Ashley Ballantyne and her twin 8 year old siblings Marco and Anya.  She sings, has played the piano, and currently plays the baritone horn in the 5th grade band.  She loves soccer and gymnastics and just this year played her first basketball season.  She skis and this year made a switch to snowboarding.  Yvette loves to draw and write poems.

She dedicated this poem to her mother.

“One single branch turns into a tree, that’s how you spread love all the way to me!" 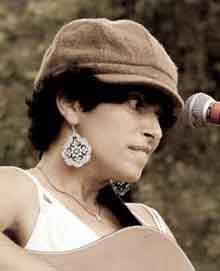 This song is composed by Yael Gmach, the middle child of Jacqueline Gmach’s three children.

Courage always finds a plan to a whole new circumstance.
And would I put out your fire if I saw the chance.
Your troubles will I soften? Am I you if you ain't me?
A double truth in front of me.
Are you sure someone is in your tree?

Love can replace the chair where you're sitting there,
Too darkened to hear the truth,
Barely afloat the gates of hell.
When can we forgive?
When will we know the winds have blown?

The seeds have grown a new TREE OF LIFE.
Kindness holds the measure.
Take a sip of faith from the well of mercy.
Throw out your fear. To grow a tree of love.

Their ways won't be forgotten, let a people hear them.
Now let em work it out somehow.
As we remember the Shoah, so it will never happen again, to you and me.
My G'd unravel the story
Tree of life, you and I, WE ARE THE TREE OF LIFE.

David Gmach: Web design at www.SitesToRemember.com
Close
The Initiative for Moral Courage. I had the opportunity to sit down with Jackie Gmach, a dynamic woman with a passion for education that can change lives and possibly change the world. This native of Tunisia, where the Arab Spring began, founded the San Diego Jewish Book Fair, now one of the largest Jewish Book Fairs in the country.
She 'retired' last year, but in name, only, as she has now brought an even greater vision to life in a new program, The Initiative forMoral Courage (IMC), which is holding its first Symposium from October 24-November 2, 2011 in San Diego. Most of the events of the Symposium are free, and open to the public.
Gmach has assembled an International Advisory Board whose names and affiliations point to the recognized importance of identifying, acknowledging and celebrating the actions of individuals who uphold moral and ethical standards, even at risk to their own lives. Their examples could inspire others to take a stand, too.
The Initiative, whose home is at San Diego State University, includes among its partners SDSU's Jewish Studies Program and Department of Religious Studies, which is offering an Honors program on Moral Courage in what may become a new course of study.
The idea grew out a model at Yad Vashem in Israel, the world center for the documentation, research, education and commemoration of the Holocaust. Since 1962, Yad Vashem has recognized the actions of non-Jews who, at great personal risk, saved the lives of European Jews. They are honored with the title “Righteous Among the Nations”.
The Initiative for Moral Courage focuses on “The New Righteous”, those who, in the recent past as well as today, saved the lives of the oppressed out of the strength of their convictions and moral courage. Modern history has presented several such opportunities, including the genocides in Armenia, Rwanda, Bosnia-Herzegovina and Cambodia, some of which will be discussed during the Symposium. “It is important for society to recognize those righteous individuals who emerge,” said Gmach, “as their efforts ensure that incidents like the Holocaust can never occur, again.” The Initiative will examine a range of issues related to the subject of moral courage under the broader rubric of contemporary global ethics.
The objective of the Initiative for Moral Courage is both modest and ambitious: "If just one person who attends the Symposium or studies moral courage has the strength to stand up for what is moral and just, whatever the cause, then we will have achieved our goal," said Gmach. Is that intention too humble? No, because a single righteous individual has the power to save many times his own number, as well as inspire others to do the same. At a time in our history when suffering is all around us and we may feel helpless to change the status quo, it is important to recognize those individuals who have the moral courage to take a stand.
The Symposium opens October 24 with an exhibition of The Rescuers, a photographic exhibit that will be on display on the main floor of the SDSU library throughout the Symposium. The exhibit consists of extraordinary stories about ordinary heroes "who resisted overwhelming tides of prejudice and violence to risk their lives saving members from enemy groups. It helps to understand the presence of rescue behavior during genocide or mass violence.” Wednesday, October 26, will feature a musical program: Music and Resistance, based upon melodies from a 1931 cantor's book that was found in an abandoned synagogue in Romania. The Rescuers exhibit will be available for viewing through November 2.