Over the 70 years which followed the Shoah (Holocaust), numerous music scores of all styles have been found which were created in the Nazi concentration and death camps. ?These are testimonies of how talent, art, emotion, and beauty can triumph over evil.

During the Shoah (Holocaust), Jews produced art in concentration camps, in ghettos, or while in hiding. Unlike artistic production undertaken by outsiders in the name of propaganda, or to confirm the events after the killing had ended, art created by victims under Nazi domination may be viewed as a form of documentation, witnessing, and spiritual resistance that plays a very important historical role as evidence from the victim?s perspective. 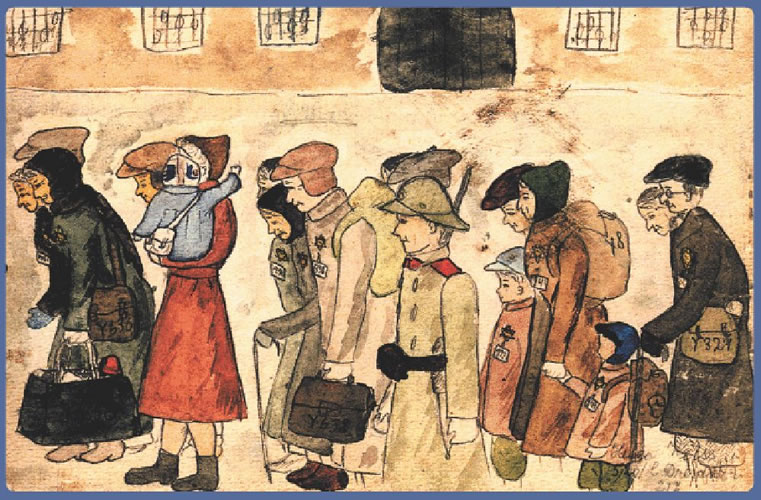 There are so many contradictions in the organization of the Third Reich that it is only surprising at first thought to learn that theatres, both permitted and illicit, exist in the German concentration camps. The nature and extent of this theatre varies in direct relation to the conditions prevailing in a particular camp. by Sara R. Horowitz
??.Performances in Dachau were, in the nature of things, extremely undercover, being carried out by the prisoners at great personal risk. There were no specific camp orders forbidding this form of entertainment but its discovery would have so infuriated the S.S. camp guards that torture and death would have followed automatically. By Curt Daniel

Like diaries and chronicles written during the war, early memoirs offer a sense of the diversity of Jewish life and Jewish responses to the German onslaught as well as the ethnic, religious, and political differences among the Jews caught in the genocidal web. They frequently focus on the details of everyday life under radically abnormal circumstances. In addition to the individual personality of the writer, these memoirs are shaped by the country, social class, education, age and the degree of Jewish identity and assimilation that the writer experienced prior to the war. As time progresses, the voices of child and adolescent survivors?well into in their adult years by the time they write autobiographically?is added to the accumulation of memory narratives, in the next wave of memoirs.
?
This stirring is a collection of diaries written by young people, aged twelve to twenty-two years, during the Holocaust. Some of the writers were refugees, others were in hiding or passing as non-Jews.? Some were imprisoned in ghettos, and nearly all perished before liberation. This seminal National Jewish Book Award winner preserves the impressions, emotions, and eyewitness reportage of young people whose accounts of daily events and often unexpected thoughts, ideas, and feelings serve to deepen and complicate our understanding of life during the Holocaust. Salvaged Pages, by Alexandra Zapruder